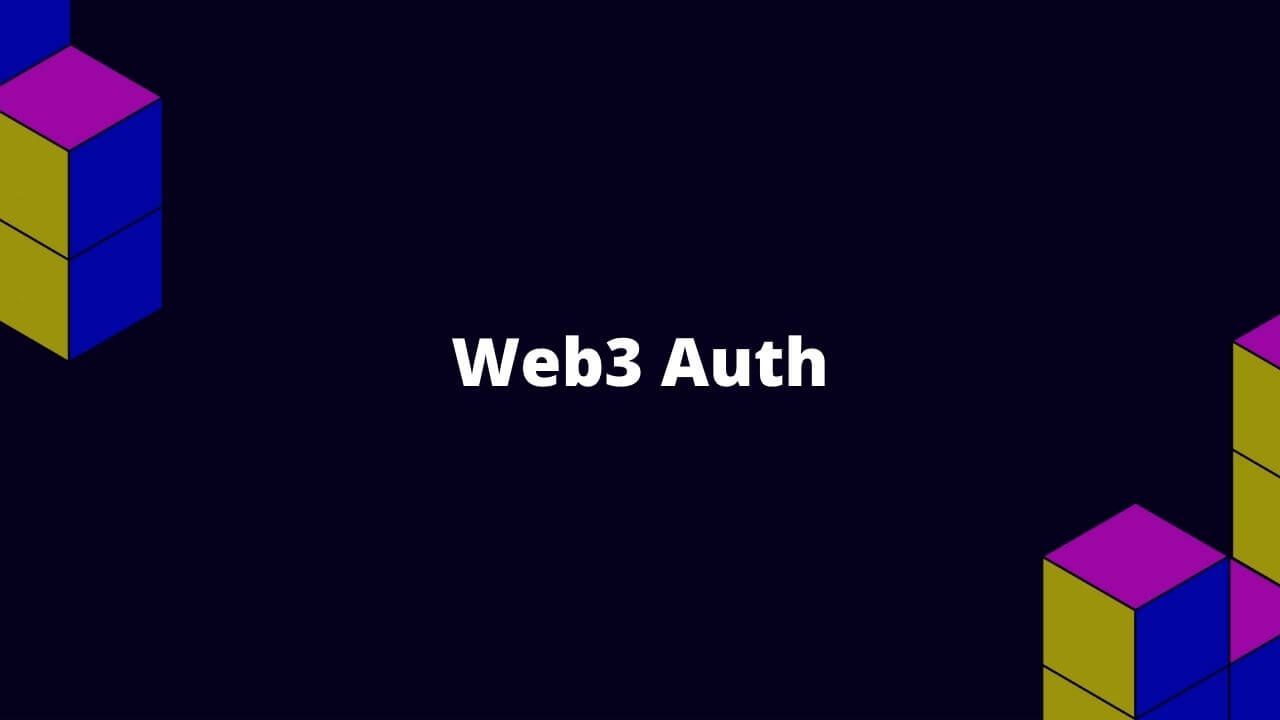 Web3 authentication is required whether a user is communicating with a Defi protocol or wishes to go far into the metaverse via blockchain gaming. Without the capacity to authenticate users on the blockchain, your Web3 applications would certainly fail. Nevertheless, allowing people to join the Web3 world offers life-altering prospects, particularly for early adopters.

If you wish to become a blockchain developer that creates very profitable next-generation dApps, you must be able to implement Web3 authentication. This may initially appear to be a difficult challenge. However, a new paradigm shift termed Moralis has arrived.

This ultimate Web3 development platform, sometimes known as “Firebase for crypto,” enables frontend developers to build Web3 authentication in dApps within minutes. Consequently, they can quickly authenticate users on the blockchain. In this tutorial, we’ll cover every aspect of Web3 authentication.

The term “Web 3.0” refers to the third generation of the web that is coming soon. Sites and apps would be able to handle data in a way that is similar to how a database works by utilizing various technologies including machine learning (ML), big data, and distributed ledger technology (DLT). Tim Berners-Lee, the inventor of the World Wide Web, originally referred to Web 3.0 as the Semantic Web and intended it to be a more autonomous, intelligent, and open internet.

The Web 3.0 concept may be expanded as follows: data would be networked in a decentralized manner, which would be a significant improvement over our present internet generation (Web 2.0), in which the majority of the data is stored within centralized archives.

Additionally, users and robots will be able to interact with data. However, for this to occur, programs must comprehend information theoretically and contextually. The two pillars of Web 3.0 are, therefore, semantic web and artificial intelligence (AI).

What does Web3 Authentication entail?

Web3 authentication may sound sophisticated, but it is a login mechanism. In addition, whereas Web2 websites employ email in conjunction with a password, Web3 applications make use of users’ crypto addresses. However, the encryption that maintains the security of blockchain networks and their users is far more complicated.

Consequently, manually logging in would need to deal with public-private key pairs, which is not user-friendly. Fortunately, there are several trustworthy hot crypto wallets available as browser extensions and mobile apps. In addition to storing and managing bitcoins, these wallets may also be used as Web3 authentication tools.

Why is Web3 Authentication Necessary?

As described previously, Web3 websites and applications operate on certain blockchains or at least let users communicate with them. Therefore, there must be a secure method for consumers to connect to these crypto networks. Using Web3 authentication, users may join a particular network. They have the green light to engage with other authorized users on the network after they have been authenticated. Consequently, this authentication method is required by every Web3 dApp.

However, developers working on top of Ethereum RPC nodes can attest to how tedious and time-consuming it is to construct such authentication from scratch. Thankfully, Moralis allows you to circumvent any RPC node constraints, including authentication. Moralis includes full integration of the top web and mobile authentication systems. Consequently, you may address this element with a single line of code.

As we go forward into the next generation of the Internet, Web3 Wallets have established a new industry standard by introducing novel methods to control and monetize our content, identity, and assets. Simply said, Web3 wallets are a method to utilize hardware or software not just to access cash but also to connect with decentralized apps, serve as a gateway to bankless financial services, collect NFTs, build on-chain identification, cooperate with communities, and enable far more use cases than the typical wallets we have today.

Wallets do not hold the cryptocurrency itself, but they do keep the information necessary to access your digital currency money.

Multiple types of wallets exist in the Web3 domain. Each has advantageous applications and may be beneficial depending on how you want to manage your data and finances. It is advisable to experiment to see which sort of wallet works best for you.

There are two types of wallets, the Hot wallet and the Cold wallet, each of which has multiple subcomponents.

Hot Wallets are sometimes referred to as software wallets since they are housed on devices with Internet and cryptocurrency network connectivity. They are handier than other wallet kinds since they can store, transmit, receive, and display tokens.

Hot wallets are regarded as having the most useful among Web3 wallets. Since hot wallets are connected to the internet, they are more susceptible to hacking than cold wallets.

These are examples of Hot wallets:

Due to the lack of an internet connection, cold wallets are generally a safer option for storing bitcoins. This is because the keys can be stored offline on physical media.

This strategy increases the hacker resistance to cold wallets, also known as cold storage. This is particularly advantageous for long-term investors.

These are examples of cold wallets:

Now that you are aware that Web3 wallets are used for Web3 authentication, let’s examine the most trustworthy solutions, namely MetaMask, WalletConnect, Web3Auth, and Formatic. Each of these choices provides a great user experience; the combination of MetaMask and WalletConnect is ideal for native crypto users, whilst Web3Auth and Formatic appeal to general users. In addition, MetaMask is perhaps the greatest solution for online users, whilst WalletConnect is a must-have for mobile users.

ConsenSys created MetaMask in 2016; hence, it has been around the longest. Moreover, as is the case with most early adopters, it has earned a great deal of appeal. MetaMask has not, however, been resting on its laurels. It became an amazing and incredibly potent instrument as a result of continual development and several improvements. It is accessible as a Chrome, Firefox, Brave, and Edge browser extension. Additionally, it supports iOS and Android devices as mobile applications.

MetaMask contains the Ethereum network, as well as the most prominent Ethereum testnets, by default. However, it is simple to add other EVM-compatible networks. Overall, logging in using MetaMask is simple and convenient; hence, it is the preferred Web3 authentication choice. Consequently, creating dApps using MetaMask is significantly easier. Nonetheless, you should also investigate how to run Web3 applications using MetaMask.

Many people believe WalletConnect is an app, however, it is an open-source protocol for creating connections between different wallets and decentralized applications (dApps). It is exactly what its name implies. Therefore, the term “hot wallet” is technically incorrect. WalletConnect provides a “symmetrically encrypted connection” between two peers using a shared key. In addition, this Web3 authentication solution is compatible with over 75 active crypto wallets.

For new users, Web3Auth is among the most popular and safe options for filling the gap between Web2 and Web3. It is utilized by prominent dApps and wallets like Skyweaver, Binance, and Ubisoft, among many others. Web3Auth (previously Torus) is a simple non-custodial authentication architecture that aggregates OAuth (Google, Twitter, Discord) logins, multiple wallets, and current key management systems. It gives every user a familiar login experience, raising conversion rates by up to 64 percent.

A few lines of code are required to integrate Web3Auth into an application. With online and mobile SDKs, you may personalize the appearance of the infrastructure for your application and integrate your authentication and user database.

Magic, formerly known as Fortmatic, is an additional robust Web3 authentication solution. Unique about Fortmatic is that you have complete control over the user experience. It is embeddable and configurable, so it does not distract people from your app. According to the official website of Fortmatic, Fortmatic is a superior alternative to MetaMask. As noted previously, the emphasis is on using MetaMask and WalletConnect; consequently, we leave it to you to investigate Fortmatic further.

How can MetaMask establish a connection with websites?

With more than 21 million users globally, this is one of the most popular wallets on the market. The wallet is offered in two distinct formats: a mobile application and a browser plugin.

What exactly is Web3 Moralis?

What capabilities do DApps possess?

A dApp is created to produce a range of apps, such as those for decentralized banking, online surfing, gaming, and social networking. DApps are created on a decentralized network underpinned by a distributed blockchain ledger.

Web3 has introduced a new category of cyberthreats. While decentralized data and services eliminate single points of attack, they may expose data to a wider variety of threats. These include both conventional dangers and those specific to blockchain networks and interfaces. Intelligent contract logic hacks.

This article describes how Web3 serves as a portal to the crypto universe. You understand how to provide users with access to Web3 by using an authentication solution like MetaMask. In addition, now that you understand what Web3 authentication is and how simple it can be covered with Moralis, you are prepared to construct fantastic dApps.