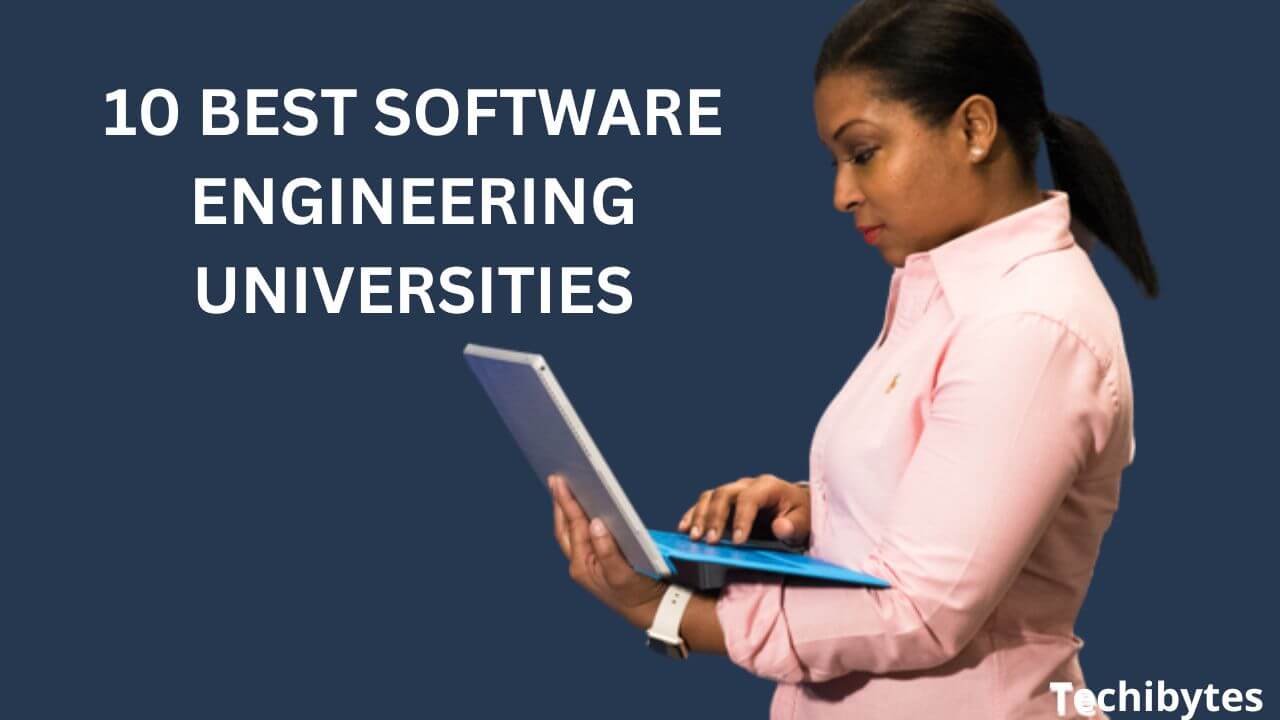 The best course of action for a student thinking about enrolling in a program to study this area of engineering is to thoroughly investigate all of their possibilities before making a choice. You might even be fortunate enough to receive a full scholarship for college to pursue this curriculum.

However, if you are confused about which university to go to for your software engineering program, then this article is for you. We have compiled a list of 10 Best Software Engineering Universities you can attend, so don’t stop reading.

What Is Software Engineering?

Software engineering is the systematic application of engineering principles and techniques to the creation of computer hardware and software.

Creating, maintaining, testing, and reviewing computer software are all a part of a software engineer’s job description. Aspects of the discipline’s theory and application are involved in the field. Utilizing information technology to resolve practical issues is the study’s principal objective.

Why You Should Study Software Engineering in a School

How Can I Become a Software Engineering Professional?

Software engineering is one of the many academic and research options now available at the University of Oxford. They established the software engineering program in the 1980s by the Computing Laboratory, which is now the Department of Computer Science, with a focus on the integration of theory and practice to enhance the study.

In Cambridge, England, Cambridge University was established in 1209. The university became known as one of the nation’s top educational institutions as the decades went by thanks to innovations in the creation of new colleges specialized in cutting-edge research as well as the ascent of eminent researchers from obscurity.

The Department of Computer Science and Technology began operations in 1937. In order to advance its research, the department continues to train top-tier computer science experts and improved its facilities, making it one of the premier schools for software engineering in the world.

According to many, MIT is the best science university in the world. Its position in the Boston area, where prestigious institutions like Harvard, Boston College, Boston University, and Tufts are nearby, is only one of the numerous elements that have contributed to its success.

In addition to having some of the best undergraduate software engineering programs in the world, the Department of Electrical Engineering and Computer Science at MIT also runs a number of top-notch computer research facilities, including the Artificial Intelligence Laboratory, which is its largest research facility.

The first reliable chess program and most of the technology that was the basis of the internet were both products of this lab, which was responsible for many innovations.

One of the most stunning campuses in North America is Princeton University, although its reputation as a technical-focused university may overwhelm its visual appeal. Students studying computer science at the institution enjoy all the benefits of attending a top-tier university with a strong concentration in their field of expertise, such as software engineering.

The Swiss Federal Institute of Technology in Zürich, also known as ETH Zürich (Eidgenössische Technische Hochschule Zürich), has long been a leader in the country’s pursuit of cutting-edge technological education. In order to advance Swiss industrialization, the national university concentrates its efforts on educating its teachers and students.

Since the department’s founding in 1984, the school has worked to advance the discipline by developing stronger software engineers, professors, and researchers while also presenting fresh ideas to the industry.

Due to these efforts, ETH Zürich has consistently been listed in the top brackets of international university rankings and among recipients of major awards.

Later, when Carnegie Tech and Mellon Institute combined, the university’s scientific research was enhanced. Since its founding in 1956, Carnegie’s Computer Science Department has constantly led the field of software engineering and produced top-notch graduates, making it one of the greatest institutions for the discipline.

For its contributions to the development of the field, the Computer Science Department has received numerous grants and honors. Thanks to the work of its faculty, researchers, and students, Carnegie has maintained a position close to the top among universities for software engineering programs.

Caltech’s Computing and Mathematical Sciences Department, which is based in Pasadena, provides some of the greatest computer science programs.

Geometric mechanics and stochastic computing are among the departments that the department conducts research in, and it is renowned for fostering interdisciplinary partnerships.

In 2017, Caltech launched an autonomous systems research center with an emphasis on robotics, drones, autonomous vehicles, and machine learning.

Students in disciplines like data science, applied mathematics, and firms like Google and the National Science Foundation give artificial intelligence prize scholarships. Among the outstanding faculty members are three MacArthur fellows, three Sloan fellows, and a number of teaching award winners. The department also houses the Kortschak Scholars program in human and artificial intelligence.

In memory of its founder, John Harvard, Harvard University, was established in 1636 and was given its present name in 1638. Due to its lengthy history and more than four decades of knowledge generation and implementation, a number of prominent graduates and social achievements can be linked to it.

Software Engineering is supervised by the Computer Science Department of the Harvard John A. Paulson School of Engineering and Applied Sciences.

To name a few, its research and educational focus areas are:

The department succeeded in every aspect, as indicated by the numerous honors and accolades it received from all around the world.

9. Berkeley Campus of the University of California

It is not surprising that the university has turned forth nine winners of the Turing Award, the highest accolade in computer science. Berkeley’s Department of Electrical Engineering and Computer Sciences, which also offers graduate engineering and research degrees, offers some of the nation’s top software engineering programs.

10. The University of Stanford.

Software engineering is only one of the many subjects and fields that Stanford has constantly urged students to study and explore through research. Since its establishment in 1925, the engineering department at this university has promoted technological advancements that have benefited the nation’s industrial sector.

With numerous accolades and prizes throughout the past nine decades, the School of Engineering has continually helped Stanford move up the world rankings. One of the best universities in the world for software engineering is still Stanford University.

What a Software Engineer Do

Several graduate-level computer software engineering tracks are offered at Southern Methodist University (SMU). SMU, which was established in 1911 and is based in Dallas, has more than 10,000 students enrolled.

Undergraduate students can add software-based courses to their computer science degrees as an alternative to master’s and doctorate programs in software engineering.

3. Texas’s University of Texas at Dallas is located in Richardson.

Every student interested in a degree in software engineering should visit the University of Texas in Dallas. The public institution UT Dallas, which is situated in Richardson, has a sizable student body. UT Dallas is a top-tier institution overall, earning a Best Schools ranking of #278 out of 2,576 institutions nationally.

In the most recent data year, around 156 UT Dallas students who studied software engineering received this degree.

More details about the University of Texas at Dallas’s software engineering program.

The project manager handles project planning, progress monitoring, and communication. To complete the project on time, within budget, and with the desired level of quality, he or she also controls risks and resources.

What does software scope mean?:

The boundary of the software scope is well specified. It covers every type of activity that is carried out to create and distribute the software product.

10 Best IT Colleges in the USA for International Students

Top Computer Engineering Degree Programs You Should Apply For