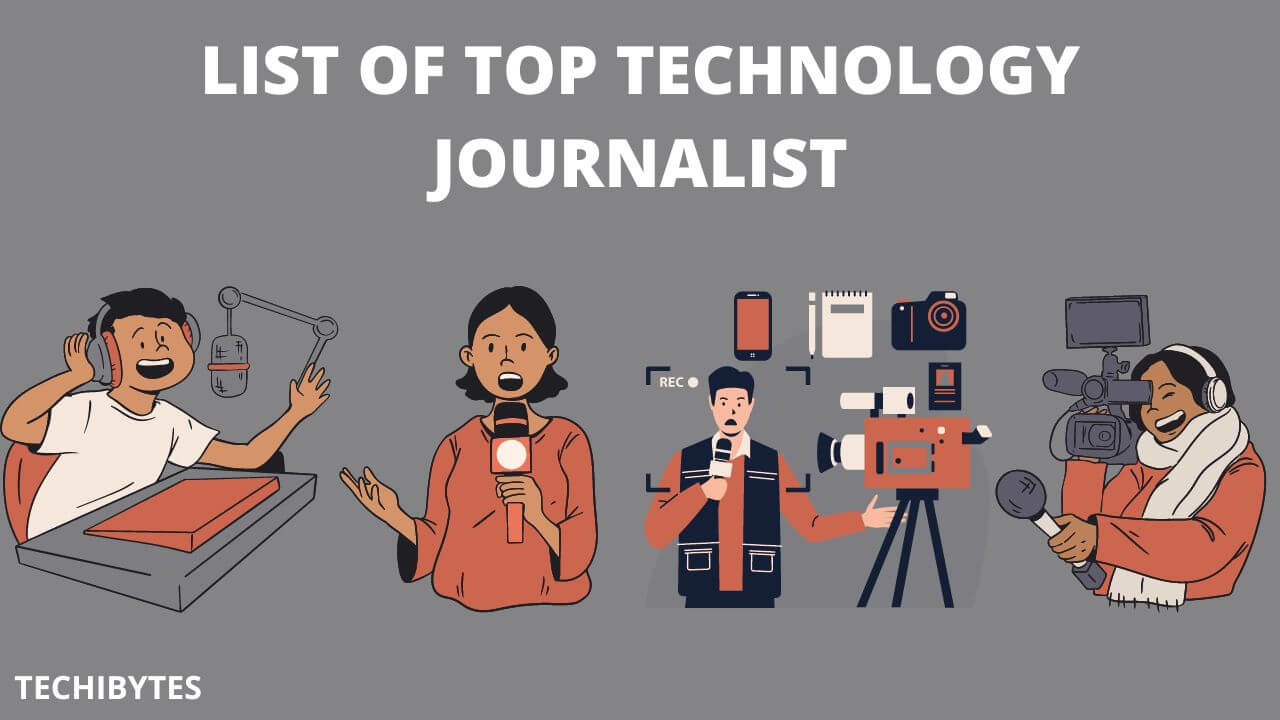 Tech journalism has been around forever, but tech journalists only started becoming popular pretty recently. With many insane tech advancements happening recently, we only have the diligent journalists to thank for keeping us in the know.

As an appreciation post for the best journalists to ever exist in the world of tech, this article will list some of the top technology journalists making waves today. The list may not be in any particular order, but there’s a pretty good chance you’ll be seeing some familiar names.

Who are Technology Journalist?

Before defining who a technology journalist is, it’s crucial to be on the same page about what tech journalism means per se. It’s basically the practice of producing written, visual, or multimedia material intended for public dissemination through the media, but with a focus on technology.

From that definition, we can deduce that a technology journalist is anyone who practices tech journalism. The job of a tech journalist isn’t as easy as most people make it out to be, and is certainly profitable, especially when a professional manages to get popular.

To become a good technology journalist, an individual must have some journalistic education, formal or informal. In addition to that, they’ll need to have a passion for tech and tech products, which they’ll certainly be working with a lot in their career.

That said, it’s evident that journalism isn’t always synonymous with tech journalism. You can always acquire the education required to become a good journalist, but the passion required for flawless tech reporting is something that comes with the combination of experience and education.

That’s why there are a few journalists that have excelled in their profession against all odds. In the following section, you’ll learn how to beat the odds to become a professional in tech journalism, before getting a list of some of the best brains in the industry.

How to Become a Technology Journalist

If you’re passionate about technology in general, you may be interested in pursuing a career in tech journalism. Going by the preceding section, you should know that aspiring for a career in this field is certainly more demanding than it seems to be.

The first, and probably the most important quality of the average technology journalist is a devoted passion for anything relating to tech. If you end up becoming a professional, you’ll have to spend around half of your time creating content about tech products and events, while you spend the other half trying out those products and attending events. It sure takes passion to do that.

In addition, you must also be proficient at disseminating information in one or more formats. Most tech journalists are impeccable writers, but having decent oratory skills with a commanding presence before the camera are skills that will make you more competitive and land you more jobs.

Note that all that has been said earlier only refers to the soft skills you need for a job in the profession. You also need some formal qualifications to be competitive in the tech journalism industry. Here are some of the formal ways to kick-start a career as a tech journalist.

It shouldn’t be surprising that the surest way to an illustrious career in tech journalism is acquiring the necessary education that firms usually require in tech journalists. This step is especially important if you don’t have a career in any related field, as nobody will hire you based on your “passion” alone.

Granted, virtually no college offers a technology journalism course, but you can make use of what’s available to pursue your goals. Aspiring tech journalists can secure admission into any journalism degree or diploma to learn about the advanced areas of the trade before venturing in.

While receiving formal education, you should naturally learn how to use most of the tools you’d be required to use in the journalistic world. Tools like Adobe Photoshop, Premiere Pro, and WordPress are staples for all journalists, and you’ll be needing them even more often as a tech journalist.

Now, it’s crucial to note that you don’t have to acquire formal education to become a tech journalist. If you already have extensive experience writing or creating other forms of content for distribution across different media, you may just be the right fit for the job.

Another method to make your way to becoming a professional in tech journalism after acquiring some formal education is taking an internship. Most media companies offer paid and unpaid internship offers for graduates and aspirants of journalism to help them gather enough experience for a job in the real world.

As an aspiring tech journalist, you should naturally gravitate towards tech media outlets, or at least, general media companies with dedicated technology reporting. Depending on your experience level, you can even get paid for being an intern with a reputable company.

The benefits of an internship are massive for a budding software engineer. For one, you get practical experience that puts you on the right path for any job in journalism, and more specifically tech journalism. Secondly, you learn how to collaborate with others to work as a team and deliver timely and captivating content.

While working to acquire knowledge and experience as a journalist, it’s also imperative to learn about some of the top technology journalists and follow their work to see what your goal should look like. The following section lists some of the “big boys” in the industry, all of whom you can learn from their works.

There’s no shortage of tech journalists on the market, but there are some we regard as the very best. This list is by no means objective, as I clearly cannot take every journalist out there into account. That said, here is a list

If you can recall reading an explainer of the Apple vs Epic Games legal battle on The Guardian, you’ve just read one of Alex Hern’s numerous works for the media company. Alex is the Technology Editor of The Guardian, a role he has played with ultimate perfection.

He has an expository writing style that he uses to explain some of the most complicated tech concepts in a way that the average layman will understand. If you’re looking for someone to credit for the improvement in the tech reportage by The Guardian in recent years, you’re literally asking for Alex Hern.

Dan Seifert is Deputy Editor of The Verge, and he has put out enough content in mobile reviews to make him worthwhile of appearing in a collection of the most respected tech journalists around. Before The Verge, Dan worked as the Executive Editor of MobileBurn.com, making him competent enough to lead any tech media team.

Dan Seifert usually works on reviews, especially that of smartphones, smartwatches, and pretty much anything that requires electricity, as he describes it. His detailed and objective reviews make other ones on the internet look like jokes, making him one of the few active technology journalists worth following.

Dieter Bohn worked as the Executive Editor for The Verge until recently, when he resigned his position to join the Google Platforms and Ecosystems team. Anyone who reads The Verge frequently can attest to Dieter’s excellent articles and videos, primarily about smartphones.

In addition to being a reporter and an editor for The Verge, Dieter Bohn also writes the Processor newsletter and creates content for a YouTube channel of the same name. He’s also the co-host of the Vergecast podcast, making him one of the finest tech journalists before his retirement.

Benjamin Dada may be better known for his entrepreneurial strides in the tech world, but what really shot him into the limelight was tech journalism. Focusing on Nigerian and African startups, Benjamin uses a unique expository writing style to report events that were previously unreported.

He created benjamindada.com, a blog that hosts all kinds of African startup news. Apart from successfully what looks like a personal blog into a successful media company, he also got hired by Stitch to lead the company’s Nigerian expansion, which is massive.

If you have read Techcabal, you’ve already experienced some of the works of Bankole, as he founded the media company and also serves as the Editor-in-Chief at the moment. Needless to say, Techcabal is focused on tech reportage, with topics spanning anything tech-related in Africa.

Not only was Bankole one of Africa’s top tech journalists, but he also became one of the most connected people in the space during his reign as the Editor of Techcabal. His unique approach to tech journalism leaves readers captivated when reading his articles, even though he isn’t really active on Techcabal anymore.

However, he’s still very much in the business; he just switched over to making videos, and as you’d expect, those videos are awesome!

Where to Find Some of the Technology Journalist

Of course, the list from the preceding section isn’t exhaustive; I only had to choose five from the thousands of excellent journalists available worldwide, but what if you wanted to find some yourself? Thankfully, it’s pretty easy to find tech journalists to follow as an aspiring one yourself.

After compiling names, you may want to head over to Twitter to follow these journalists to help your feed better recommend others to follow. LinkedIn is another platform where most of them are active, and you can also check that out to see what they’re doing there.

If you’re an aspiring journalist, it’s crucial to note that following the top journalists alone is probably not going to do you much good. When journalists get insanely popular, they tend to go for roles like Editor-in-Chief, which makes them generally unavailable for active journalism. Keeping up with budding reporters like you will probably do more for your tech journalism career, plus it helps you build bridges!

Tech journalism is a highly rewarding career, but it also comes with a lot of responsibilities. In addition to the requirement of formal education and editorial experience, passion for tech is also required for success in this field and is one of the common factors among every listed journalist in this article.

If you’re really aspiring to become a journalist, it’s crucial to follow these figures, study their work, and figure out what it really is like to practice tech journalism professionally.